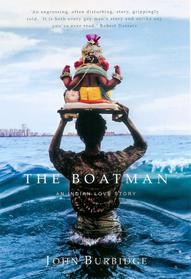 It's very South Asian not to talk about things.

Burbidge took shocking risks exploring his newfound homosexuality and found a capacity for the covert that fascinated and appalled him. This and his compassionate and respectful depiction of Indian street life from the perspective of an outsider with a keen eye for detail and a hunger for discovery make a memorable read.

In this intense and sensitive story, Burbidge skillfully weaves the thread of a double life in a alien cultural setting. He connects us to his journey as he struggles with complex issues around ethnicity, class, tradition, sexual orientation, and relationships. He reveals truths about India as well as himself through a perfect balance of narrative, dialogue, and introspection. I'm always craving more yet fearing what may lie ahead.

Sharing the same childhood origins as Burbidge, I was interested to see how a differently sexually orientated person in his day had to leave Australia to assume his adult identity. His writing is taut and lively and the reader enters into his skin as he crosses his Rubicon and negotiates unknown terrain without any guidelines.

This unique chronicle tells the story of an Australian coming out in the many and sometimes dangerous cultures of India, while adeptly straddling the culture of a closely-knit, non-profit organization. At every turn, we urge him on, hoping he will not only survive the dangers but also this courageous journey of becoming true to who he really is. Cry and laugh with Burbidge. You will gain courage for our own journey, whatever it is.

The Boatman took me into the very personal experience of a young man not only recognizing he is homosexual but discovering an extensive homosexual community in India. He was on a steep learning curve as he tried to navigate between his demanding work life and his wonder and excitement in an unknown sub-culture. His openness to new experiences was frightening, especially as he was surfing this scene shortly before AIDS.

I met John Burbidge in Brussels when he was working for an NGO after his sojourn in India. He was then taking a writing course, which seems to have paid off for he writes an engrossing story. His writing is so vivid, one can almost taste, see, smell, hear what he describes.

It is hard enough coming out in a Western society but to have done so in India took great courage. I felt I had been to India after I had finished the book. It is written in a truthful and deeply moving, and at times, terrifying manner. The author's relationship with his mother was particularly touching. I had to read it in one sitting because I was totally involved from the first page to the last.

This story of a gay man living in India and discovering his sexuality is interesting in itself, but I also appreciated the inclusion of his mother and their relationship, as well as the interactions with his work colleagues. No matter one’s sexuality, any reader can relate to this book.